The Coastal Emperor Blog is Worth a Read

I recently stumbled across a Blog called The Coastal Emperor as the blog’s founder wrote a very nice piece about my friend Kyle Jacovino and his departure from the kitchen of the 1540 Room at the Desoto Hotel back in August.

The article on Kyle and 1540 was as honest as a subjective piece of writing can be and truly refreshing for me as a new discovery. The writer clearly loves every single thing Kyle does and has done and believes that Kyle has been screwed over by Savannah and a lack of understanding by Savannahians as to Kyle’s talents as a chef. The writer is also no fan of The Grey. He intimates that we are hollow and a product of hype because we have received numerous accolades for the work we are doing. The writer ate at The Grey about a year ago so it is not only his right to form and offer whatever opinion he wants, but frankly, informed critique and criticism are really needed in Savannah so, in spite of the fact that we are not his cup of tea, I was quite happy to read an honest point-of-view even if it was at our expense.

That said, it will not come as a shock that I disagree with the writer on multiple fronts. I do think that Kyle is a phenomenal cook – truly, a great talent that Savannah is lucky to have and I hope he chooses to set up shop here in whatever his next venture may be. But to blame his departure from 1540 solely on nebulous “forces” at work within Savannah is dubious at best and conveniently dismissive at worst. I always thought that Kyle’s tenure at that hotel was going to be short-lived. To have a chef-driven restaurant in a space like that requires the full support of the hotel management and a long runway to build a following. Kyle, not at all surprisingly, never received either of those things from the hotel operators as their business strategy is clearly a short-term one, likely built around revenue and profit.

As a friend of Kyle’s (who I asked to read this piece before I posted it so that he could confirm that what I am saying in it is accurate), I can also tell you that he learned a lot from his experience at 1540. He learned about menu development. He got closer to finding his own voice as a young, dynamic and evolving chef. He made some really good food and also some mistakes along the way. Of course, he bears a portion of the responsibility for his successes and his failures, as we all do, which the writer of the piece conveniently ignores.

As it relates to The Grey, I think his assessment of us is off base in several ways.

Are we a “showy disappointment,” as he states? Well, obviously to him we are but that implies that we are mailing it in. I invite the writer to come and sit in our restaurant between the hours of seven in the morning and when we open for service and witness the heart and soul that every member of our team puts forth from Mashama and me all the way through to Daisy, Flounder and Otter. OK, fine, maybe the dogs don’t work so hard but the rest of us do and the sole reason for that is to provide a complete and satisfying experience for our guests. 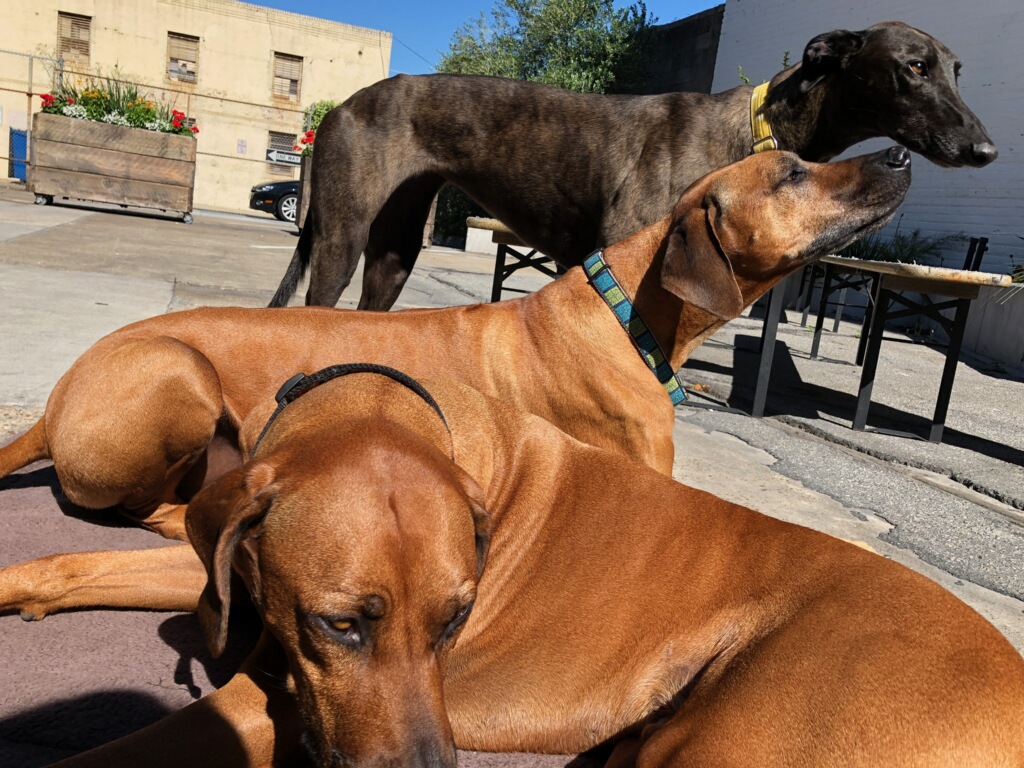 Flounder, Otter and Daisy hard at work at The Grey

Now whether you like Mashama’s food or not is another story, and clearly the writer does not which is totally fair and his prerogative. But please, don’t attack our commitment to doing what we do. Frankly, don’t attack anyone in this fragile food landscape on their effort if they are trying hard. I completely support your right to say you don’t like a restaurant’s food or service, including ours, but at least applaud the effort when a genuine effort is being put forth.

Finally, do we use local ingredients?

His critique on the “farm-to-table” nature of what we do (a phrase we have never and would never use internally or in our external messaging), is misguided. It is true that he’s never going to see a US Foods or Sysco truck in the lane behind The Grey, however, he will see Ernest Macintosh in his pickup truck delivering oysters to us from Harris Neck, Georgia. I think the writer, if he is serious about what he claims is his mission, should ask Ernest and his son, who now has a business to grow for the next generation of Macintosh’s, if we have been a showy disappointment in our commitment to them and their locally raised oysters.

So, let me say this to Mr. Milton, the writer – I love the fact that you love Kyle and his food. Me too. And, I completely respect the fact that you do not like The Grey. But don’t love on something because you think it makes you seem enlightened and don’t hate on something else because you think it makes you seem more an individual. Kyle’s food is not mystical; it’s delicious. And Mashama’s food is not hype; it’s also delicious.

That is as honest an opinion as I can subjectively offer.

With all that said, please, please, please… keep doing what you’re doing Mr. Milton. It is only through honest and informed opinion that we are all, together, going to continue to elevate the food game in Savannah.