The Current (www.TheCurrentGA.org) is a new online news source here in Savannah that covers our city and the entire coast of Georgia. I am very proud to say that I helped to get it launched, along with some extremely talented people, this past September by founding the not-for-profit organization that birthed it. Yes, you read correctly—it is also not-for-profit source of news. The Current does not take money from advertisers and it is not attempting to make money for its funders. It is, to put it simply, a community-funded public service.

To that end, The Current embraces the pillars of in-depth journalism with an eye toward informing and arming the citizens of Savannah and coastal Georgia with information through fact-based, non-partisan investigative reporting. That all sounds lofty, right? But it’s not lofty at all. Our democracy was founded on the idea that a free, fair and strong press is at the very foundation of that democracy’s ability to thrive. Thomas Jefferson put it this way, “Were it left to me to decide whether we should have a government without newspapers, or newspapers without a government, I should not hesitate a moment to prefer the latter.”

If that were not enough to get you excited, here is some more. The fact is that newspapers around our nation, particularly in the South, are being financially and journalistically decimated and, as a result, they are disappearing. In the state of Georgia alone, there are almost 30 counties without a single newspaper and many other counties’ news coverage is primarily centered on the crime blotter, high school sports and the obits. To put this in tangible terms, the killing of Ahmaud Arbery in Glynn County, GA, just about an hour south of Savannah, was not known by the public for nearly 75-days after the shooting took place. Now I get the fact that the case is yet to be adjudicated but if the coverup that ensued for 75-days is not a clear indicator of the dearth of investigative journalism in our region, I am not sure what would be.

The Current’s newsroom is world-class to boot. We are all fortunate to have a woman in town who calls Savannah home. Her name is Meg Coker and she is The Current’s editor-in-chief. Meg has had a long and storied career as an investigative journalist first at the Atlanta Journal Constitution, then the Wall Street Journal and, most recently, as the Baghdad bureau chief for the New York Times. Her reporting has received the kind of accolades that are, well… they are kind you read about. To help her run things, Meg tapped Susan Catron who has been in Savannah for 15 years as the executive editor of the Savannah Morning News. Susan’s local and regional knowledge combined with Meg’s global perspective is the type of team you would expect to find in metro areas ten or twenty times the size of ours.

The Current and its parent, the Georgia corporation and IRS registered 501c3 called Grey Matters Project, came about as the result of series of tragic events that took place here in Savannah a few years back. These events were a turning point for me and the catalyst that sparked this entire not-for-profit news thing.

You see, on July 3, 2017, Scott Waldrup, the general manager of The Grey, the Savannah-based restaurant I co-own with my business partner, Mashama Bailey, stood on the balcony that is cantilevered off the second-floor kitchen of my wife’s and my home in Savannah’s Historic District. He was acting as the M.C. of the summer staff party that we host in our back garden each year. Below him were forty people, mostly twenty-somethings in bathing suits, swimming in our long, narrow pool or milling about on the patio. Everyone had a cold beer or glass of rosé in their hands. Some were chomping down on a grilled burger or hot dog. Scott’s bushy red beard was perfectly coiffed. His brightly colored, rayon ‘Uncle Sam’ shirt was unbuttoned to his naval where it tucked into a pair of rolled up, close fitting jean shorts.

He was announcing the winners of various gag gifts, to a squealing crowd. “This prize goes to someone we all know and love,” Scott bellowed dramatically stretching a scant Speedo, his personal favorite article of clothing, in pinched fingers of both hands. “It is for a very special guy and a pretty good server too.”

The volume of the crowd raised louder as they cheered Scott on, music blaring in the background.

“This is for Ben,” he said, the applause thunderous as he tossed the tiny swimsuit down into the yard where a red-faced, baggy-board-short-committed, embarrassed Ben snatched it out of the air before it hit the slate patio.

Scott was larger than life that afternoon—both a leader and ringleader. All of us, every single one of us, loved him dearly.

That afternoon was indeed unforgettable as the very next night, as he crossed a busy Bay Street in the heart of Savannah’s tourist district, after an evening of watching the Independence Day fireworks with friends, Scott was severed in two by a car traveling seventy-seven miles per hour as it sped away from the scene of a gang shooting, police in hot pursuit. Scott was well dead before his broken body hit the blacktop.

I was angry for a long time after that night. Government had failed Scott terribly. How could a gang shooting take place in the middle of the busy downtown tourist district on Fourth of July night? Didn’t things like that happen elsewhere?

As time passed, my thoughts broadened from Scott. I started to consider the three boys who were in the car that took Scott’s life. Two of them, Spencer Stuckey, seventeen, and Gabriel Magulias, twenty, were also killed as the car impacted a telephone pole after striking Scott. Jerry Chambers, only sixteen-years-old when he was shooting other people and driving a car that killed three young men, was recently sentenced to life in prison. Hadn’t the system/government/something failed those boys as well? How did they reach a point at which they had become suicidal and homicidal while they were still just boys?

My anger, during the second year after Scott’s death, began to turn to energy. I thought to myself, what would Scott do? Scott was an activist. He was relentlessly in support of the underdog. He worked tirelessly for the LGBTQ community. He was activated and, really, truly a force of nature inspiring everyone around him to do more and to be better.

I am not an activist; never was. I’m an entrepreneur and a restaurateur who has been completely uncomfortable with doing more than that beyond donating a little bit of money to the causes I find worthy. But, in the wake of his death, I began to feel Scott’s stare on me—that glean in his eyes fixing on me. I felt the irony in his smile and the dramatic shrug of his shoulders saying to me, “Well Johno, I really got you this time. You’re just gonna have to do more than cheer from the sidelines this time around if you want to make a difference. It’s time to put up or shut up.”

So, over time, I started futzing around with the concept of a not-for-profit inspired by Scott and the lost boys from that July night. I wanted to do something that would contribute to our region in a way that would make it less likely that a night like the one that claimed those three young lives was even possible. I wanted to help by creating something bright and positive in support of the concept of accountability of government and leadership. It took a couple of more years and the insertion of seasoned and lauded journalist, Meg Coker, but the result is The Current and its glorious ability to shine light into all the corners of Savannah and coastal Georgia.

Now that it is launched, however, The Current needs the support of the people in this community who believe, like we do, that the need for an independent, non-partisan news source is fundamental to our collective well-being and our ability to overcome the challenges that we all face. We seek the people who are not complacent or satisfied with the way things are in our community. We seek those who feel that the challenges we face belong to all of us and to meet them, we must expose them to the light of day and confront them together, as a community. We need those who will not let journalism die because the archaic business models that have supported it are broken. We need those who will not acquiesce because hyper-partisanship has become the norm. That should not good enough. We should want better than that, more than that. 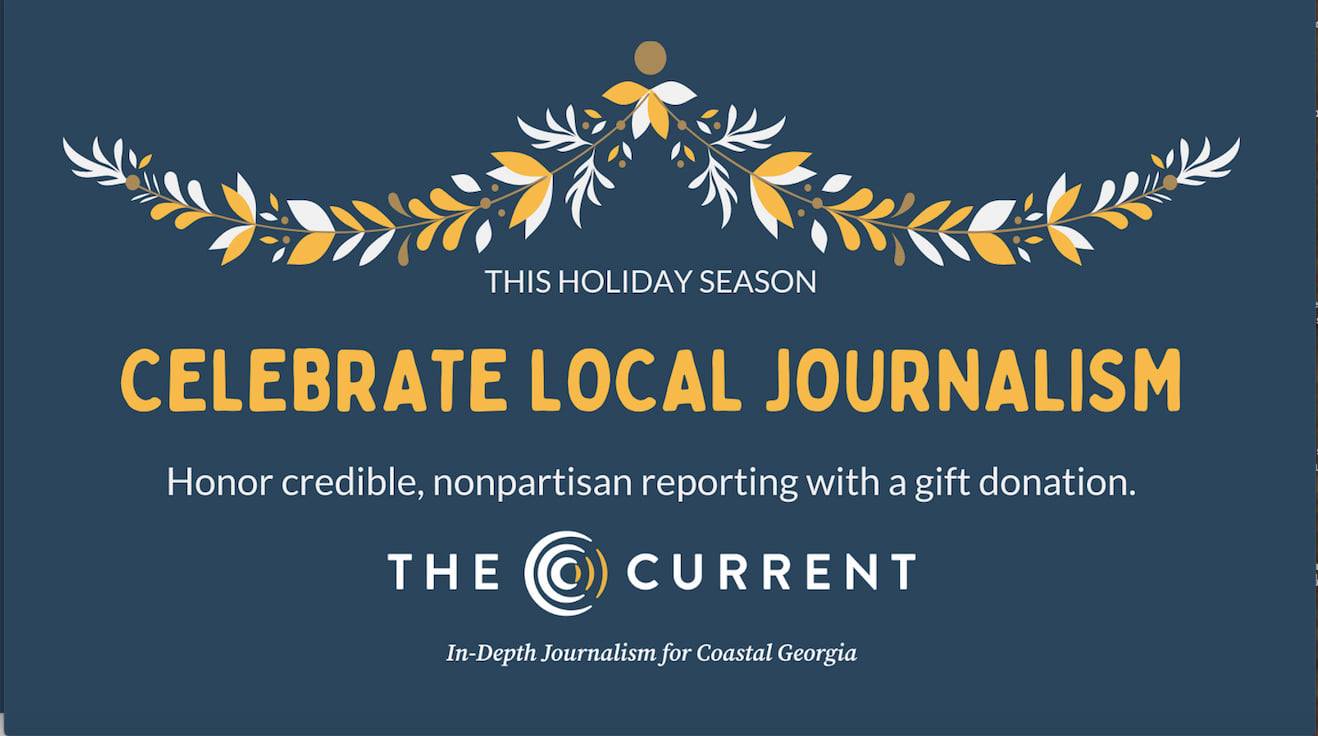 In order to achieve more, achieve better, it is going to take all of us who strive for that. We need everyone who is capable of supporting The Current’s efforts to do so. Your politics do not matter. This is a non-partisan endeavor. Go to The Current’s website and read the stories Meg and her team are writing and I think you will be convinced of its mission. Those stories will keep coming and they will always be free to anyone who wants to read them. But we need your financial support for this undertaking to be able to achieve its full potential. With your support, The Current will become something for which we can all be proud for decades to come. So please, go the website, hit that DONATE BUTTON and give what you can—$1, $5, $50, $500, $5,000, $50,000 or any amount you see fit. If you want to talk about how else to help, hit me up in social media or track me down at the restaurant. I would love to chat with you about that too.

We are after all, as Scott taught me, in this together.