Leadership is a funny thing.

There are no hard and fast rules that determine what makes a good leader which makes leadership a bit like the Supreme Court’s famous 1964 ruling on obscenity – you know it when you see it.

And, you know it when you don’t see it.

Since my colleague and friend Scott Waldrup was murdered in the very early morning hours of July 5, 2017 on the corner of Bay and Barnard streets, I have been thinking a lot about leadership. It is during times of extreme adversity that natural leaders lead and new ones emerge.

By way of example, look at what has taken place over the past nine days since the violent tragedy took place last weekend in Charlottesville, Virginia. Leaders have emerged in unexpected places; leaders like Susan Bro. Ms. Bro is the mother of Heather Heyer, the young lady who was slain by an alleged neo-Nazi, hatemonger. Ms. Bro is certainly mourning her daughter Heather with a strength, dignity and resolve that is downright inspiring. 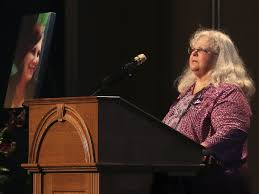 If that were not enough, she is also taking her personal tragedy and turning it into a force to further inspire people to loudly reject racism, fascism and, the most egregious of crimes, complacency in our elected officials. 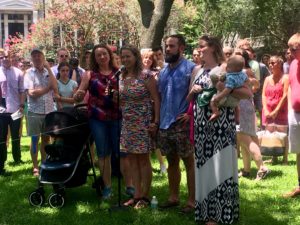 Terry and family at ‘Celebration of Life’ for Scott

Why is it that these two women, who had every right to crawl up into little balls and beg of us that we leave them alone with their grief, chose to lead us while they themselves were in their very darkest of moments?

I believe it is because that is who they are.

They are the women who have the remarkable capacity to subjugate their own feelings of devastation and loss so that they can support other people by calling upon their gifts of empathy, understanding and, yes, leadership. Terry Waldrup and Susan Bro exposed their own broken hearts so that we, the people whose need was so great that it was, to them, palpable, could touch those hearts and draw upon their strength to fortify our own. They allowed all of us to, quite literally, take a piece of them so that we could mend ourselves.

By the same token, there have been many failures of leadership on display as well.

Throughout my lifetime I have never really, truly understood it when people spoke about an American President or other world leader as someone who ‘unified’ their country or some international contingent. This week, I discovered why. Every American President since I have been old enough to be aware of such things, regardless of their political leanings, has indeed unified our nation in times of crisis. It is an absolute. That is what Presidents do. As such I have never had to intellectually digest someone not doing that. That was until I watched and listened to President Trump in the aftermath of Charlottesville.

Whether you found his words to be the cold, hard truth or completely lacking a moral clarity and purpose, I think we can all agree that he has not united our country. Beyond not genuinely attempting to unite us around a national tragedy and disgrace, he has somehow actually managed to polarize us further.

That is, in my opinion, a leadership failure of epic proportions.

During my time in Savannah I have had the pleasure to meet much of Savannah’s civic and political leadership, some past and some present. Most are good, talented and decent people. Most are well-intentioned and care about you and me and all of Savannah’s citizenry.

But caring and good intentions do not, on their own, a leader make.

Being bound by political and cultural loyalties in the face of evil is not leadership.

Pandering to any one group or the other is not leadership.

Attacking the people with whom you disagree is not leadership.

Obstructing, bickering and working at cross-purposes is not leadership.

Failing to empathize with people in circumstances different than your own is not leadership.

Failing to communicate clearly with your stakeholders is not leadership.

And not showing up is certainly not leadership.

All of this, in my typically long-winded way, brings me to my point.

I do not feel led. In fact, I feel a bit lost. In speaking with many people since that horrible night in July, I have learned that many other Savannah residents feel the same way. Many of us do not understand any of Savannah’s strategic or tactical goals for facing down our challenges. We do not hear a cohesive voice coming from our government, agencies or other organizations meant to achieve progress and success. We do not even know what success is or how it is defined in Savannah.

I am sure strategic and tactical plans exist. They must. We cannot be working without a script, can we? So who is sharing those plans and uniting us all around them? Who is the person pounding the table and saying “Follow me. I have the plan. Follow me and together we will make Savannah better.”

Since Scott’s death I have had countless people come to me and ask me how they can get activated in Scott’s memory because they want Savannah to heal and get better. We all love Savannah. That is why we are here and why we are investing our time and resources into it. We are here to help. I raise this issue to help. We are here to join with our leaders to face down Savannah’s challenges and overcome them.

But we have to know the plan. We have to know what success is and how we measure it. We must be informed by those of you making the decisions.

We, as a community, must be unified and we must be led.

(If you have any thoughts you want to share regarding this, Johno Morisano can be reached via email at Johno@ProgressByScott.org).

« My Cheers to Scott
Fraternity, Community, Pastrami »
Book your The Grey Restaurant reservation on Resy