My Cheers to Scott

On Friday, July 7, 2017, in Pulaski Square, I delivered some words at the Celebration of Life that was held for my friend and colleague Scott Waldrup. There were a fair number of people in attendance who asked me to make those words available online and I thought publishing them as July’s blog post was an apropos way to do this.

My only caveat is that the words below are exactly what I wrote that Friday morning immediately before Scott’s memorial and I am quite certain that what I spoke at Scott’s event was somewhat different. I felt like I was getting a bit long-winded that day and I started adlibbing and shortening my speech (something that doesn’t come all that naturally to me as many of you know). As I cannot remember the final words I spoke, my only option is to publish the words that I wrote. Sorry for the length of them.

I want to promise my fellow Savannah residents that I will use all tools available to me to help to affect the change that I discussed last Friday afternoon (and that is the subject of what is written below) and Mashama and I are determined to fully activate around the issues Scott’s murder has spotlighted for us.

Thank you all for the support you have shown Scott’s family, Mashama, The Grey team, Carol and me. We can never thank you enough Savannah. 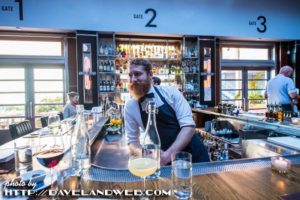 Scott Waldrup behind the bar at The Grey

Hey, I am Johno Morisano from The Grey and I have worked with Scott for most of the past three years.

I cannot tell you anything you do not already know about Scott if you were lucky enough to be acquainted with him or blessed enough to call him your friend. Scott, it is safe to say, was not a chameleon. There was nothing hidden or secreted about him. Scott was who Scott was. End of story.

If you are here because you read about Scott online this week or in the newspapers, all I can say is that all of it is true.

He was absolutely hilarious.

And, in case you didn’t know it, Scott was gay.

He was that rare person who was simultaneously an idealist and a cynic.

He had a remarkably well-coifed red beard that, despite its sheer volume and epicness, was only outmatched by the relentless smile that that red beard made futile efforts to conceal.

He loved Speedo Sunday only slightly less than his family Terry, Jen, Stacey and Dave.

And he loved his soulmate Tart with a childlike giddiness that made the rest of us take note and give our own soulmates an extra squeeze every now and then just to try and keep up with him.

Scott shined in everything he did. He shined as a friend, colleague, son, partner, brother, mentor, mentee, activist and activator.

And this past Tuesday night on Scott’s favorite day of the year, the 4th of July, a car traveling at a rate of speed too fast for the police to have yet determined, a car filled with homicidal lunatics, hit him so very hard that he was dead before his body even made it to the pavement. It busted his red-bearded face and his getting-ready-for-Speedo-Sunday body so badly that the coroner’s office advised his mother not to look at her baby boy one final time before his remains were cremated and the vessel that contained his extraordinary soul would never again be seen by his mom, sisters, father, partner or any of us. A tragedy indeed.

As is often the case with life, a fairly complex social undertaking Scott might say, tragedy also brings with it surprise and hope. For Carol and me, spending so much time with Scott’s family this week has been one of those so very good surprises. If you ever wondered how Scott ended up the man he did, just spend some time with these folks and it will become evident very quickly. The resilience and love they have shown is humbling.

And if you ever wanted to see the best of Savannah, well, look around you. Ask all of us in Scott’s work family at The Grey and in his immediate and extended families and we will all tell you about the infinite support that we received from our friends, neighbors, competitors and strangers these last few days. The love that we have been showered with is life-altering. There is no way we exit this week, on so many levels, the people we were when we entered it.

But, by the same token, if you can bear to see the worst of Savannah, well that was on display this week too.

I know for many of us the worst is also difficult to look at but the time during which we have stuck our heads in the ground or accepted governmental paralysis because of social, racial and class divides must come to an end.

Scott was killed this week by three murderers and frankly none of us should care if they were black murderers or white murderers. My business partner and the chef at The Grey, was crossing that street with Scott when he was struck and killed and through some small twist of fate Mashama Bailey’s life was spared by the narrowest of margins.

The color of Scott and Mashama’s skin mattered not in the moments in which we lost one of Savannah’s brightest lights and held on to another.

What is going on in Savannah is not a black/white or gay/straight issue. It is a Savannah issue. Political and cultural loyalties do not matter when people are dying and all of our civic, city, county and state leaders need to cast those loyalties and encumbrances aside and work together. We need to work together to create change and to solve this problem so that people – black people, white people, brown people, all people – stop dying.

For almost three years, Mashama and I have been sharing stories of The Grey and Savannah with the media, near and far, about all that is good about Savannah. We have told them why we all moved here and why we chose this city in which to live our lives and invest our time, energy and resources here.

This week that narrative changed for me. Maybe it should have happened sooner, but this week, because of the senseless death of one of the most beautiful people I have ever met, it all changed.

But here is where the hope comes in. I was speaking with someone from the community this morning and that person reminded me of something. He reminded me that bones of this City, this place – Savannah – are good. And we can make its narrative right again.

But it is going to require real, substantive change at every level.

And as for Scott Waldrup, well he never accepted the status quo.

It’s time for us to all take one final lesson from Scott.