That said, I was reminded in the last couple of months that getting people to all pull in the same direction is not always so easy. Being new to the restaurant business I had no expectations about it when we started The Grey a few years ago. I went into it with some basic goals. I wanted to build something that was community oriented and, given my Italian heritage, food to me equals community. I wanted us to be good at it. And, I wanted The Grey to be accretive to Savannah.

My experiences during this period have been overwhelmingly positive. Our team, our guests and our fellow restaurateurs, chefs and peers have, for the most part, been exceptionally supportive. This summer we experienced that support beyond our wildest dreams in the wake of the tragedy that took the life of our General Manager, Scott Waldrup. This weekend that camaraderie is showing up again as many of us rally around each other in the face of Hurricane Irma.

But, in turn, about a month ago, I got a fairly stark reminder that there are always going to be people in this world who just do not get it. This is such a minor happening on one level and then so revealing on another that I was at first reticent to share it but I think it is worth it.

The protagonist in my little tale of woe is pastrami.

It is a simple tale.

In late July, we at The Grey did something not so very revolutionary…

We added a pastrami sandwich on rye bread to our Diner Bar menu. 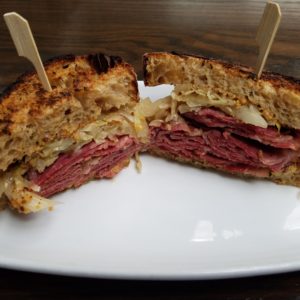 As many of you know, Mashama and I are both from NYC where Katz’s, Russ & Daughters, and the Second Avenue Deli are icons to us. We love deli food; Jewish deli food in particular. Can’t get enough of it really. Mashama and I have been talking about a pastrami sandwich since we met; obsessing about it even from time-to-time.

And in July we finally got our act together and announced the inclusion of one of the great New York City staple sandwiches on our Diner Bar menu. Sous chef Brian (who is pastrami crazy) cured the pastrami, brined and fermented some sauerkraut, ratcheted up some good deli mustard and pastry chef Erin contributed a rye loaf that is just bombass bread. We debuted our creation via an Instagram post.

Now we were thinking that as far as cured meats go, there is nothing very offensive about pastrami. I mean it’s not liverwurst, or that bologna-like substance with the olives in it, right? I am sure there are people out there who don’t care for it, but hey, pastrami can’t really piss you off.

But we were wrong.

We did offend someone – one woman in particular. This woman’s response to our Instagram post that pictured and described the aforementioned pastrami sandwich was – “You mean just like [insert name of a well-known, local restaurant]’s sandwich??”

I know it is hard to believe, but another restaurant in town already had a pastrami sandwich on their menu.

But, in this woman’s mind the only inference to draw is that all other restaurants (or maybe just us) should be prohibited from putting a pastrami sandwich on their menu. Her clear implication was that we somehow ripped off the idea of a pastrami sandwich from this other restaurant by having the audacity to house-cure pastrami, fucking pastrami for God’s sake, and offer it to our guests in the form of a sandwich. A classic sandwich at that.

Dear offended-by-pastrami-lady, where we come from (which I think is the same place from which you hail) pastrami is as unique as the places that create it. Just ask a fellow New Yorker if they prefer the pastrami, or corned beef for that matter, from Second Avenue Deli or Katz’s and you will get an earful going into great detail about consistency, spice blend , fattiness, leanness, the bread, the mustard, the kraut and why one is so much better than the other.

Now everyone is entitled to their own opinion, that is for sure. But what puzzled me about this woman’s accusation is that she works in the food and beverage industry for a company that provides services to us and other restaurants in town. To be fair, she is not the first person to put her own wit and opinion above the good of the industry she serves nor will she be the last. For those of us in this business, our feelings are not hurt by these comments or critiques whether they are fair or unfair. You must have thick skin when you put yourself out there the way that we all do and it is indeed within people’s rights, just as it is this woman’s right to call us pastrami thieves, to say anything they wish.

But it makes me wonder…

What is the hope of uniting Savannah around our larger problems and challenges when there are people in the world who choose to not even commit to supporting the very industry that powers their personal livelihood? How do we keep pressing forward with our oft-referenced growing food scene when there are people within our own ranks who cannot even follow mother’s advice – ‘If you have nothing nice to say, say nothing at all?’ How many people who make shitty comments does it take to impede progress?

Inside The Grey, we have a zero-tolerance policy among our team for this sort of foolishness. We preach ‘one-for-all and all-for-one’ internally and we feel the exact same way about every single person, group and establishment trying to elevate the food game here in Savannah.

As we pull together this weekend to weather Hurricane Irma, it is a good time to remind ourselves that we cannot reach our full potential as a restaurant, business or greater community unless we genuinely come together and folks lead by example. While this woman’s quip may seem small and insignificant on its face, I believe it is anything but. I believe her words, however subtle or veiled in her social media claim that she is ‘fluent in sarcasm,’ are the words of divisiveness and our fragile food community should not tolerate it from within our own ranks or from our service providers. We should call it out and let those people know that they are either with all of us or against all of us.

Then we would be helping to set an example for our greater community where the problems are very real ones.